Wind and solar energy has become drastically cheaper to build in South Africa to a point where they are nearly half the cost of new coal, according to the country's principal research organisation.

The Centre for Scientific Industrial Research (CSIR) has proven the dramatic difference in costs, based on tenders that were held this year for wind, solar and coal, and assumed costs for other technologies. 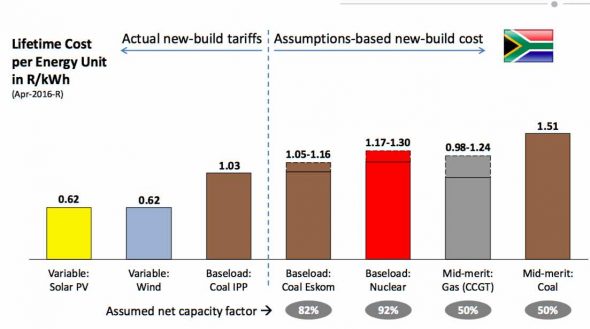 The graphic, analysed by Dr. Tobias Bischof-Niemz and Ruan Fourie shows an equal price for producing wind and solar plants. Both are more than 40 percent cheaper than new baseload coal plants. Solar and wind are at 0.62 rand per kilowatt-hour ($A0.058/kWh), while coal stands at 1.03 rand/kWH ($A0.09/kWh).

The result is a standout for South Africa, given that, unlike developed economies, it has a shortage of power rather than a surplus. Therefore, South Africa needs to build new capacity in order to meet the demands of its growing population and economy. 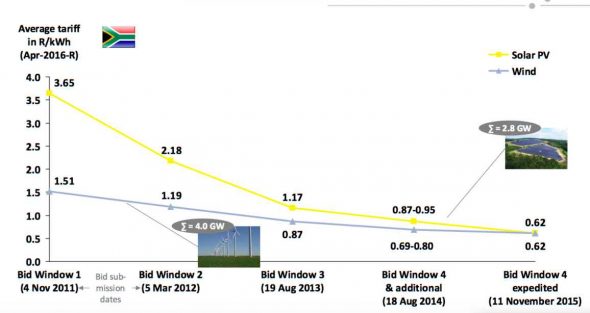 South Africa has also brought down the cost of solar dramatically in five years since it began competitive tenders for large-scale projects. As this graph above shows, the most recent tender, in November last year, was one sixth of the cost of its first tender in 2011. The cost of wind energy has also fallen by 60 per cent.

EE Publishers says the solar PV, wind and coal IPP tariffs presented by the CSIR for South Africa are fully comparable, because they are all based on long-term take-or-pay contracts with the same off-taker (Eskom). Notably, the cost of coal does not include the propose carbon tax of 120 rand per tonne of Co2, making coal even less competitive.